The Pursuit of Optimal Money


Comparing gold and silver to bitcoin and altcoins may suggest that there are some benefits of diversifying a portfolio among a basket of commodities and cryptocurrencies. But how can we analyze the future demand for gold, silver, bitcoin, and altcoins? In this guest article, Demelza Hays from Incrementum gives interesting insights.

History and economics provide some insights into how the market for blockchain based assets will develop over the next few years. What we may see is the divergence of two unique sets of payment cryptocurrencies: On the one hand there will be store of value coins that require energy to produce, have a fixed supply, and have decentralized consensus, and on the other hand, there will be medium of exchange coins that have an inflationary supply and centralized consensus.

There are three economic questions that are key to understanding the future demand for cryptocurrencies and their physical counterparts.

1.) Does money need to have non-monetary applications?

This question is important because if gold’s value depends on its use in industry, then there is little evidence to support Bitcoin’s current valuation. However, Ethereum does have “non-monetary” use cases. For example, Ethereum can be used to list and trade security offerings. In the case of Ethereum, a large portion of the market cap comes from demand for non-monetary applications.

Altcoin dominance got as high as 71 % in January of 2018 but has recently been around 40 % with a 30-day rolling average of 39 % and an uptrend. Another way to look at the relation between bitcoin and altcoins is to compute the bitcoin to altcoin ratio. This can be done several ways, such as dividing the market capitalization of Bitcoin by the market capitalization of all altcoins. Figure 2 shows that over the past three and a half years, the ratio ranged from 8 in 2016 to a low of around 1.65 at the present. This presents a bullish signal for Bitcoin if we assume mean reversion. 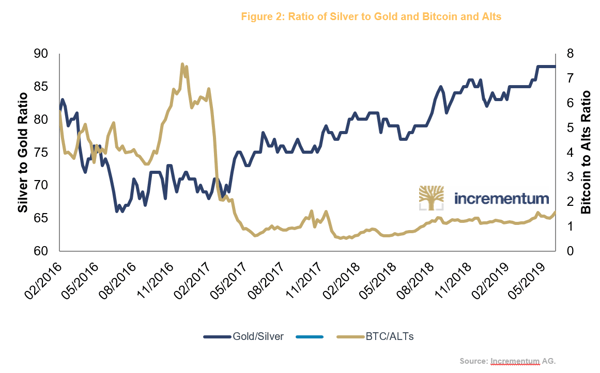 Similarly, the silver to gold silver ratio is at the lowest it has been during the past century at a current ratio of 88 to 1. Silver stackers are expecting a rally in silver any day now… Although, they have been expecting that day to come for several years already…

But if the concept of intrinsic value doesn’t make sense to you, that’s good – because nothing has “value within itself.” Value can only be imbued by an external evaluator. Think, “Beauty is in the eye of the beholder.” The saying does not mean that beauty is something calculatable, objective, or intrinsic. Instead, it means that beauty is based on the subjective values of the person who is doing the beholding. Intrinsic value is a common misconception. A lot of people think that things have “intrinsic value.” However, the concept of “intrinsic value” runs perpendicular with Carl Menger’s theory of subjective valuation, which states that the value of a good is not determined by any inherent property of the good (Peter Schiff), nor by the amount of labor necessary to produce the good (Karl Marx), but, instead, value is determined by the importance an acting individual places on a good for the achievement of his or her desired ends (Carl Menger).(5)

However, economist Saifedean Ammous claims the exact opposite. He says that Bitcoin’s advantage over gold is that it only has value as money. Effectively, the demand for Bitcoin directly reflects the demand for cash balances (savings) instead of nonmonetary applications.(6)

Gold bugs and Bitcoiners seem to be arguing with each other over the optimal form of money.

Money has three purposes: Medium of exchange, store of value, and unit of account. Italian founder of the Institute for Digital Gold, Ferdinando Ametrano, released a paper in 2014 arguing that neither gold nor Bitcoin make good money.(7) His main reason: Inelastic supply.

This brings us to the second question that is important for understanding how the cryptocurrency market might develop in the years to come.

“If a cryptocurrency system aims to be a general medium-of-exchange, deterministic coin supply is a bug rather than a feature. This is because changes in coin demand get translated into changes in coin price, making price volatility proportional to demand volatility. But that is only a first order effect, for expectations of future levels of coin demand give rise to speculation. If the expectations of the long-term rate of coin adoption are significantly greater than the rate of coin supply growth, people will buy and hold coin in anticipation of future adoption, driving up the current price of coin.”(8) (Robert Sams (2014))

Source: Wikipedia.
Stability of purchasing power and stability of the fee used to transact the coin are two mandatory requirements for becoming a unit of account. If you have a stable purchasing power but not a stable transaction fee, then it defeats the purpose. This is one of Maker Dai’s problems. Although the Dai solution is a clever way for pegging the purchasing power of Dai to the dollar, the transaction fee on the Ethereum network is expected to go up once the network gains adoption. The volatile cost of sending Dai could one day make the whole project fail. This is why coins like Libra are interesting. Since proof-of-authority and proof-of-stake blockchains are not based on proof of work, they can ensure low and stable fees. Another advantage that Libra has over Maker Dai is that the purchasing power of a Libra is not pegged to the inflationary dollar. Instead, the Libra Association could institute a monetary policy that is less inflationary than the U.S. dollar and pegged to a consumer price index or gross national product, for example.

It could be that Bitcoin and gold are too inelastic for being a currency. The supply growth of gold responds slowly in response to higher (seasonal) demand for cash balances (savings). Gold (and Bitcoin) have finite supplies. The average annual growth rate of the gold supply is around 1.7 %, with a rather small standard deviation, which makes the price of gold dependent on its demand. There are possible ways to make gold more elastic:

Why is this the case?

Imagine if a Swiss milk producer sees the price of milk going up month after month. The farmer would have to determine why the price of milk is going up. Is it going up because people demand more milk? Or is it going up because the Swiss National Bank inflated the currency supply by 600 % since 2010? If the farmer did not study economics, s(he) may assume that the higher price of milk means the demand for milk is going up. They will dedicate time and money to buying new cows and equipment in order to produce more milk. Once the central bank raises interest rates and the number of Swiss francs in circulation deflates, the prices of milk will go back down, and the farmer will lose the time and money that they spent on investing in more production.

Stability of the unit of account that all prices are priced in is a fundamental ingredient for economic growth because producers use prices as surrogates of information regarding consumer demand on the market.

This is similar to our current economy where increasing nominal prices send a false signal to producers that consumer demand is increasing. When the Swiss National Bank closes the faucet of newly printed money, the entrepreneurs that expanded production go bust – causing systematic economic downturns. On the other hand, a deflationary unit of account based on gold or Bitcoin could result in under production by entrepreneurs.

3.) Can we achieve final settlement with a decentralized network?

The chief economist of Degussa, Thorsten Polleit, pointed out that coins like Bitcoin do not have “finality” or final settlement.(11) Theoretically, even the transaction contained in the genesis block of Bitcoin could be double-spent if an adversary had enough computer power to recalculate the entire blockchain. Any coin that is based on proof of work has this problem. Even as someone who has been firmly rooted in the Bitcoin camp for six years, the idea of basing an entire financial system on top of a proof-of-work ledger that cannot guarantee final settlement is worrisome.

Conclusion
Economists have been pursuing a theory of optimal money for centuries. Whether the optimal money should have non-monetary applications to stabilize its value and whether the money should be elastic or inelastic to demand shocks has been heavily debated by economists since the 19th century.

Peter Schiff says that the only reason cryptocurrencies exist is because of regulations that stop us from using gold as money. However, there is some evidence against his argument. If objects with “intrinsic value” make the best money, then we should all probably use batteries storing energy to buy goods and services directly instead of using energy to mine gold and bitcoin and then buy goods and services.

Furthermore, gold is inelastic and too volatile to be used as money. Various solutions have been proposed over the last few centuries to make gold more elastic, such as bimetallism, real bills, and fractional reserve. Similarly, Altcoins and the lightning network are proposed solutions to Bitcoin’s inelastic supply. An enlightening read to go deeper is the Bitcoin programmer Eric Voskuil’s article on the utility threshold of different coins (12).

Adding the question of the correct way to achieve finality in a decentralized system through the use of checkpoints or proof-of-stake systems further complicates the debate.

In conclusion, the market appears to be moving towards a dual asset ledger where proof of stake, which is more centralized and more scalable (elastic) is used for medium of exchange (like Libra) and proof of work, which is more secure is used for a store of value (like Bitcoin).

These questions will shape the cryptocurrency market over the years to come and insights into the answers can help guide our investment decisions in the present. The July 2019 edition of the Crypto Research Report focuses on this topic. (13)

Securitization helps reduce the cost of the lending business. At the same time, it creates new investment opportunities. Patrick Loepfe, Chairman and co-founder of the Swiss Fintech company GENTWO, explains how this is. 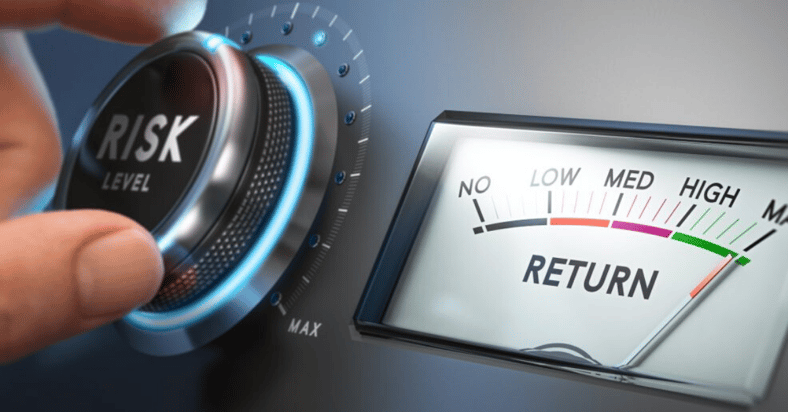 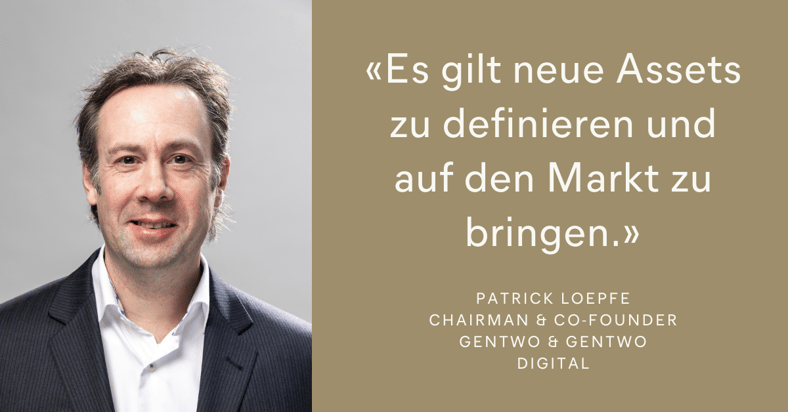